Stories are powerful and fascinating. Everyone loves a great story, a book or a film. The world we live in today has been shaped by millions of different stories. History is where these stories are based on evidence. Historians use evidence to try to understand why people believed what they believed and why they did what they did.

Studying History therefore helps you uncover just how different society, culture, beliefs and politics were in the past, and how we got from then to now. All History can be linked to today, and so at Honywood, History is not dusty and boring; it is relevant to everyone in their day to day lives.

Studying History provides you with skills that aren't confined to the study of the past. Skills of analysis are invaluable in every career, and the ability to analyse and prioritise information is vital to decision making. In the modern world, where information is so easily accessible, how can we give our young people the confidence and skills to question what they are seeing online? History at Honywood aims to deliver engaging and rigorous History, not only so that learners are successful and achieve great results at GCSE, but so they are critical thinkers and informed citizens, able to question the world around them.

History at KS3 develops highly skilled Historians through rigorous, engaging and enquiry based learning. Guided through carefully chosen topics, Historians learn the key skills they need to explore significance, cause and consequence, change and continuity, and use of evidence to support their hypotheses.

Learners explore a range of enquiries, including…

In all of these units learners will address key questions, acquire a depth of historical knowledge, develop their written communication and the ability to analyse both primary and secondary sources of information.

In Cohort 9 learners focus on Thematic Studies, Britain: Health and the People.Learners begin their thematic study by examining various different development of Historical skills by examining developments in medicine. They consider the causes, scale, nature and consequences of short term and long term developments and the impact these changes had on British society. Honywood GCSE Historians will be answering questions on which ancient doctors had the greater impact on medical advancements and the impact war and individuals had on the advancement of medicine.

Learners then go on to study democracy and dictatorship in Germany from 1890 to 1945. Learners explore how Hitler, a poorly educated and once homeless man, managed to take the Nazi Party from 54 members 1919 to gain 11,737,000 votes in 1932, to become the German dictator. Learners investigate how Hitler destroyed Germany’s democratic system and turned Germany into a police state that would go on to kill over 7 million Jews, communists, homosexuals, gypsies and other ‘enemies of the state’.

the period of the Cold War which saw the world under threat of a nuclear apocalypse. How did it come to this, and who was to blame? Learners investigate the role of nationalist movements in causing and sustaining conflict and how it proved difficult to resolve the tensions that arose in Korea and Vietnam.

In Cohort 11, Learners then go on to study Norman England. Learning considers the impact the arrival of the Normans had on England and how they went about establishing their rule. Learners look at five major aspects of Norman rule, including the economy, politics, social, cultural and religious standpoints. Learners investigate how the Normans succeeded in the Battle of Hastings in 1066 and how they went about establishing their rule in Britain after the invasion. They investigate life under the Normans and church reform under William the Conqueror. Learners will also be required to study a specific historical site in depth, looking at the location of the structure, how it was built and how the context of the time fits in with the historical site. 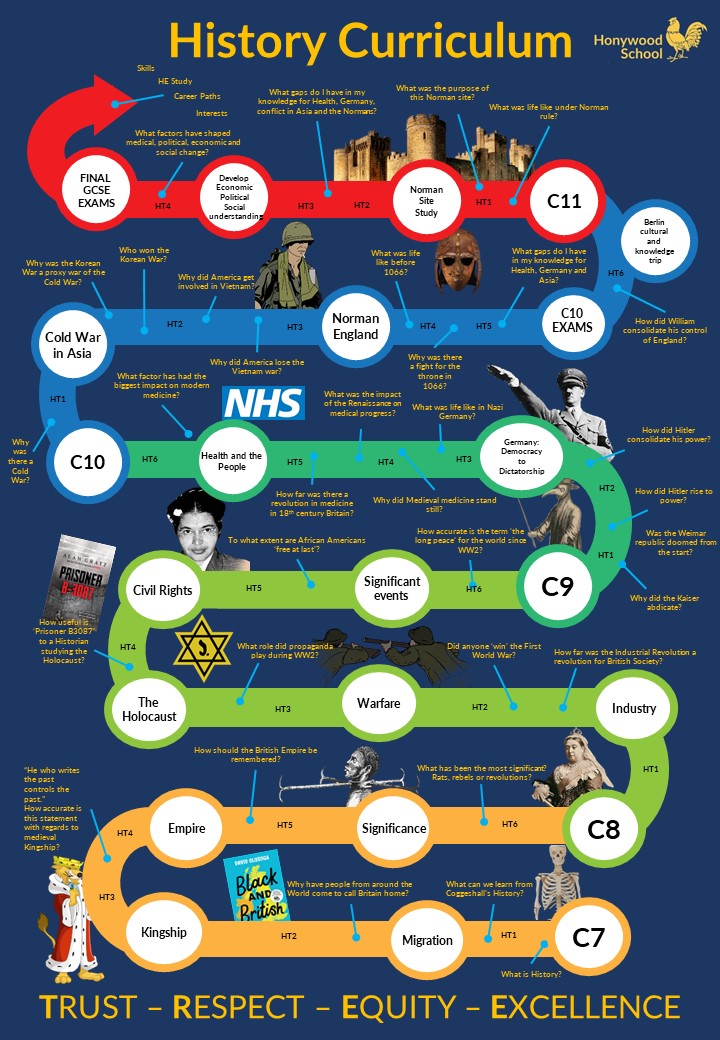